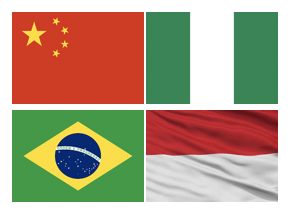 How does Nigeria’s historical growth compare with that of Brazil, China and Indonesia?

GDP per capita is a major indicator used in measuring progress of a country overtime. No doubt, Nigeria has experienced remarkable growth in GDP per capita over the years but how does this growth compare with that of Brazil, China and Indonesia? Here, we explore GDP per capita of the four countries from 1970 – 2018. These countries have a few things in common: Great growth prospects, large populations, three out of four are resource-rich and are fast developing countries.

Data from the World Bank shows that all countries recorded growth in per capita income from under $700 in 1970. China recorded the highest per capital of about $10,000 in 2018, while Nigeria had the lowest of $2,000. China and Indonesia enjoyed a steady and remarkable increase in per capita GDP during the 48-year period. Brazil and Nigeria experienced both increases and declines during intervals. Fall in per capita GDP for both countries is largely influenced by oil price crash.