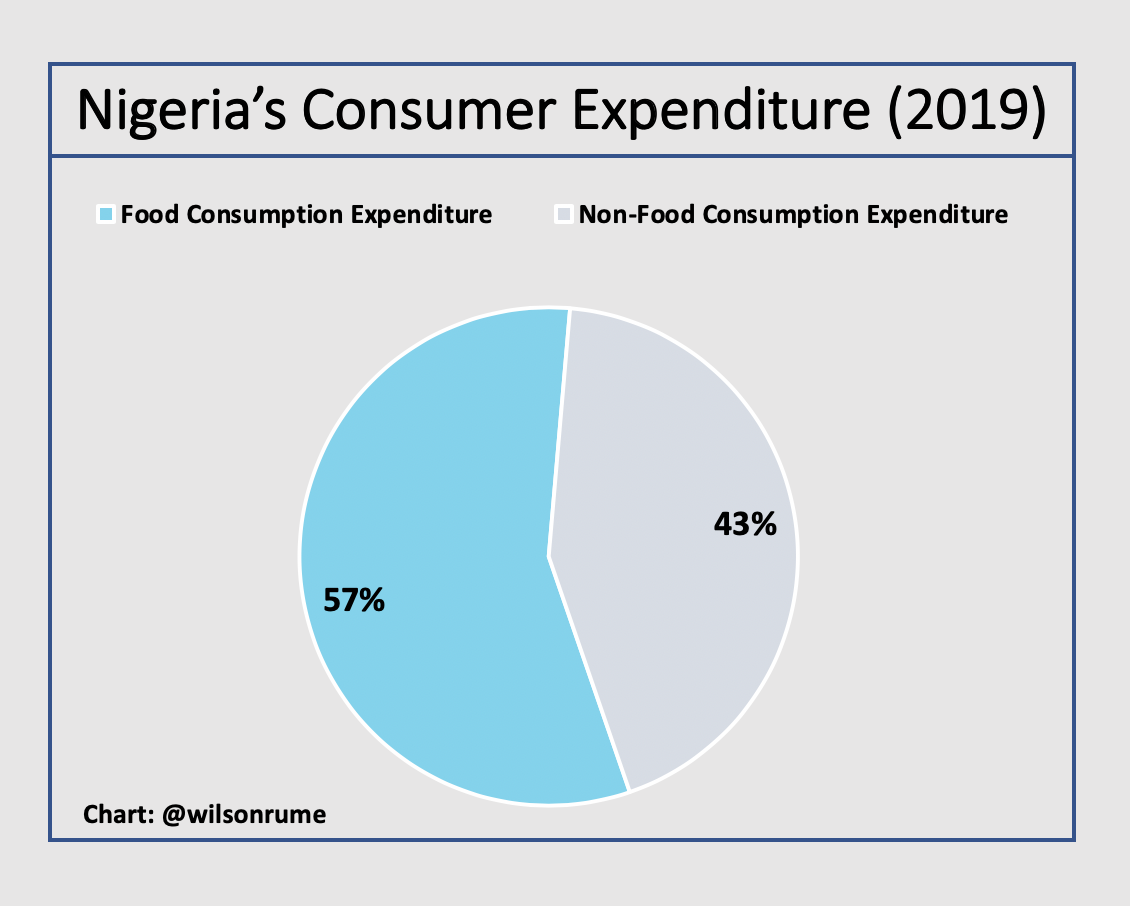 In May 2020, the National Bureau Statistics (NBS) released 2019 Consumption Expenditure Pattern in Nigeria. According to the NBS, the purpose of this report is to portray household consumption expenditure types by food and nonfood items at the national, zonal level, and state level, and also the urban/rural split.

Total consumption expenditure for 2019 in Nigeria was N40.2 trillion. While expenditure on food accounted for 57%, non-food expenditure had a share of 43%. This brief provides insights and analysis on this consumption data with focus on national and regional patterns. Expenditure at state level will be captured in subsequent briefs.

Below are some findings from the NBS survey on Nigeria’s Consumption Expenditure Pattern:

Expenditure for food was N23 trillion in 2019. From this figure, Food Consumed Outside of Home accounted for 20% and totalled N4.6 trillion. This category consists of breakfast, lunch, dinner, alcoholic and non-alcoholic drinks, etc. that are consumed outside the home. Rice, which is a staple food, accounted for 8.7% (N2 trillion) of total food expenditure in the year.

The chart below shows a breakdown of the type of food Nigerians purchased and how much was spent on each type. From a business perspective, this reveals the opportunities in the agricultural and food processing industry in Nigeria.

Expenditure by Region shows the South West, led by Lagos State, spent the most on food and non-food items

The South West spent the most on Food in 2019 at N6.2 trillion, which is 27% of total. Lagos accounted for 39% of total food expenditure in the region. This is not surprising given cosmopolitan nature of the state among other factors. This followed by the South South (N4.6 trillion) and North West (N4.3 trillion). The North East spent the least. The same trend was witnessed for non-food expenditure.

The South West is the region that spent the most on Health (N530bn) while the North East spent the least (N196bn). Among all the non-food expenditure items (Transport, Health, Education, Services, Rent, Fuel/Light, Clothing and Footwear, Household Goods, Entertainment and Water), Health was the number 1 non-food expenditure item in the North East, North Central, North West and South East. It was number 7 in the South West (after clothing and footwear) and 4th in the South South after Transport, Education and Services.

Entertainment: South West tops the list followed by South South, South East and North West.
Rent: South West spent the most on rent across all regions. However, rent was number 5 non-food expenditure item in the SW (after Fuel/Light). Expenditure on rent was higher than education in the NW and NE.

1. Opportunities exist: Despite the tough business terrain, there are opportunities in Nigeria for individuals/businesses.

2. There is power in numbers. Nigeria’s huge population of over 200 million may not host a significant number of wealthy people relative to the poor, the fact remains that even the poor spend money on food, transport, clothing etc. EVERYDAY!

3. For public policy, government’s role is key: For businesses and individuals to maximise the opportunities that exist across key sectors especially during and post COVID-19, the government must play its part in ensuring a favourable business environment and in providing support and incentives to businesses. Specific hurdles such as poor infrastructure, regulatory bottlenecks, poor power supply, unwarranted charges from government and non-state actors etc. across sectors must be tackled to allow significant inflow of both domestic and foreign investments.

4. Policies must target income growth for citizens: As countries make progress and become more developed, the share of spending on food in total spending automatically reduces. Currently, the data shows that food expenditure accounted for 57% of total expenditure in Nigeria, which is relatively high and suggests that majority of citizens are at the survival stage with low income. Government policies therefore must focus on increasing income and ensuring appropriate distribution of wealth for citizens. Developing a national or regional skills development programme in collaboration with the private sector; establishing a favourable business environment for job creation; implementing income transfers to poor and affected households (in the light of COVID-19) among other measures, are crucial.

6. Weird relationship between education and health? From the data, regions where education was not a top priority like the NW and NE spent more on health care. This suggests, perhaps, that not spending a significant resources on education is associated with poor healthy choices and results in illness and therefore higher spending on health. This point, however, requires further investigation to draw up a credible conclusion.

This article was written by Wilson Erumebor. Data Source: National Bureau of Statistics

Wilson Rume Erumebor About the author

Wilson is an Economist with over a decade of experience in areas such as macroeconomic policies, fiscal and monetary policies, inclusive economic growth, youth development and poverty studies.